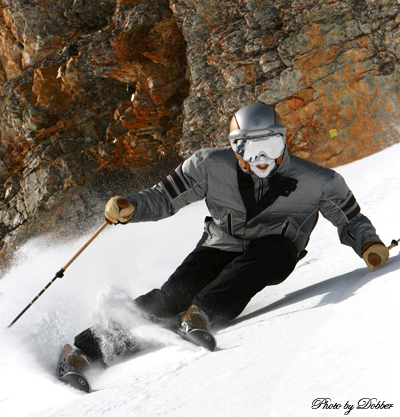 Alan Schoenberger was born in Denver, Colorado, and grew to become a dancer, world champion skier, alpine performance artist, and ski educator. He has been skiing for all but five years of his life. Much of this time has been dedicated to combining his intimate understanding of dance and ski simulator technology with a career in skiing. As a professional skier he has taught skiing, competed and performed internationally, and has published award winning technique on alpine skiing. With his extensive background in ski technique he has developed a one-of-a-kind approach to ski education that blends his knowledge of dance with alpine technique in a realm he calls the ultimate prepared alpine learning environment, SkiStudioParkCity. There, he specializes in translating current alpine world cup technique and his methods principally relate to modern ski design.

Schoenberger is the 1976 World Ballet Skiing Champion. He is credited by many for bringing the sport of ballet skiing to a new level of artistry by combining theatre and dance into his ballet skiing.

Schoenberger began skiing under the expert tutelage of his athletic father. His fathers love for alpine skiing quickly translated to Alan's passion which grew through college. While in flight school, Schoenberger had a devastating motorcycle accident leaving him in a wheel chair with severe facial and spine injuries. This period of recuperation gave him time to rethink his goals and he transferred to Utah State University. Still in a Jewett back brace, he won Utah State University's combined alpine and nordic Ski Meisters Cup. 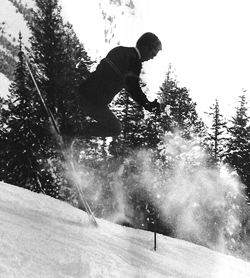 Schoenberger was also working to develop his mogul skiing with a strong focus on precision and speed. Inspired by the early films with Rudy Wyrsch and Art Furrer, he began to experiment with trick skiing and then inverted aerials.

His thirst for the technical understanding of skiing and how to help others learn to ski began to develop. He was certified as a ski teacher under his skiing mentor and alpine coach Robert Parker. Parker was the Intermountain Professional Ski Instructors technical vice president and he introduced Schoenberger to Horst Abraham in Vail, the visionary who was quietly developing an exciting new approach to teaching skiing. Invited to attend a series of extraordinary ski education meetings and clinics with Abraham in Vail, Schoenberger gained a new perspective of ski technique and ski teaching that empowered him to challenge the status quo and to pursue technique and teaching methods tirelessly in the face of conservative individuals who view change with fear.

He returned to Utah and immediately implemented this exciting new approach to his skiing and his ski teaching. 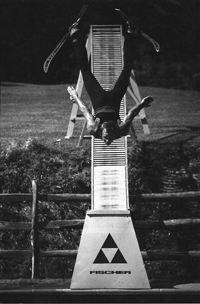 In New York, during the summer months, while coaching swimming and springboard diving, a different passion was developing. Schoenberger's dance and theatre training was drawing him in with the same zeal he felt for skiing. He had become immersed in the dance techniques of Merce Cunningham, and the physical comedy and mime of Moni Yakim. In the summer of 1971, as part of the emerging Manhattan new vaudeville scene, Schoenberger was inspired to begin writing a theatrical stage piece that would combine his love for skiing with dance and theatre.

That summer he and his father pioneered a rolling-pin jump that was set up in the Millbrook Golf and Tennis Club swimming pool. This gave Schoenberger a safe environment to transfer his diving background into inverted aerial maneuvers on skis.

The next winter, Schoenberger was invited to teach skiing at Snowbird, Utah where he continued to develop his technical understanding with Junior Bounous, and notable alpine teachers 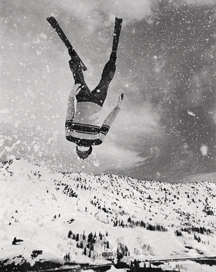 Jerry Warren, Chris Ryman, and J. Milton Beens. Schoenberger continued to develop his high speed mogul skiing style and his dance on skis. He began to develop larger tricks executed carefully to his music. The result developed into a tightly choreographed, Cunningham/Yakim influenced, alpine dance for the snow.

By 1973 Schoenberger was looking for a venue for his "theatre on skis". That lead him to begin training full time for the sport of hot dog skiing competition in order to use the ski ballet arena as his stage. During the early days of freestyle skiing, all three events (mogul, ballet and aerials) were considered as a combined sport, requiring participation in all three events. However there was a conflict. His critical ski teaching peer group viewed the early mogul champions as lacking the technical skills of elite skiers such as alpine racers. His growing relationships with the ski teaching community was at professional risk with his potential involvement with hot dog skiing.

Regardless of the dilemma, by the spring of 1973, Schoenberger had perfected his alpine dance and Beens invited him to perform during the intermountain division of the Professional Ski Instructors of America (PSIA) spring clinic at Alta, Utah. His performance met support from his peers. There, skiing legend Alf Engen and Max Lundburg invited Schoenberger to utilize Alta as home for his emerging dance on skis and to help him further develop his mogul and aerial expertise.

Fortunately, by then, more technically proficient skiers were beginning to dominate mogul competitions. Skiers like Ellen Post, Mike King, Jack Taylor, Mark Stiegemeir and Deno Dudunack were adding a tremendous legitimacy to the sport professionally. He saw an opening to succeed in a sport that was soon to explode by virtue of attracting talented alpine skiers. 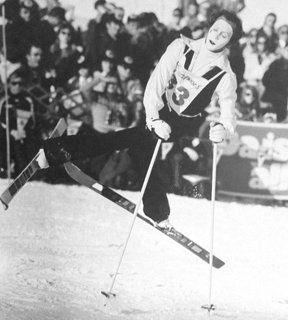 He began experimenting with more creative ski ballet movements drawing far deeper from his dance and theatre background than before. With long hours of intense practice, He repeated movements to music late into the winter nights under the dim lighting from the nearby Gold Miners Daughter Lodge. From his new home, Alta, he catapulted into international freestyle competition. For three years, Schoenberger dominated freestyle ballet competition in Europe, Canada and the U.S., winning or placing second in most all ballet contests.

Being known mostly for his ballet skiing, Schoenberger surprised the international skiing community by winning a silver medal in combined (moguls, aerials, and ballet skiing) at the 1975 World Hot Dog Championships in Cervinia, Italy, placing him second overall in the world by the year's end. Schoenberger was in a strong a position to win the overall freestyle skiing title the next year. However, a difficult landing while practicing a double reverse somersault at Sugarbush in the late fall of 1975 landed him in the hospital, separating his ribs from his sternum. He healed enough to compete mostly in the ballet skiing events, and that brought him back in touch with his original intention. During the winter of 1976 he earned the World Trophy in ski ballet.

Schoenberger's skiing has been featured on network television, and in books, magazines and film.

Schoenberger’s introduction to the "ski-deck" was during the fall of 1975 when Ski Utah presented Stein Eriksen with Alan Schoenberger on the national ski show circuit. With the success of this tour, he was soon invited to perform his ski ballet indoors in every corner of the world. But by submitting to performing on the less-than-adequate ski-deck, he had to compromise his skiing in ways contrary to everything he had learned as a professional skier and ski teacher. While he continued to compete on the world freestyle circuit, Schoenberger's disdain for the ski-deck drove he and his father to begin engineering designs for a more advanced ski simulation device. The simulator that they had in mind would be a complete departure from traditional ski-deck design and would vastly improve the skiing sensations for his eventual theatrical performances. During this time he finished writing his first alpine theatrical for indoor stage production. 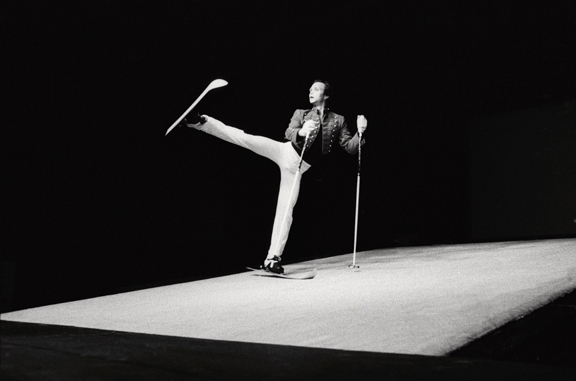 In the autumn of 1979, Schoenberger introduced his one-of-a-kind ski simulator and set out on a national theatrical tour with his zany tragicomic alpine stage production, Alan Schönberger Ski Bum in Piano Roll.

Schoenberger immediately realized that his breakthrough design in ski simulation could dramatically alter ski teaching and alpine race coaching. In the spirit of Horst Abraham, he began to develop a unique approach to instruction that challenged conventional teaching and coaching wisdom. He was soon teaching private ski sessions on his alpine theatrical simulator when he wasn't touring.

This brought Schoenberger to his involvement with ski education on an elite level and he formed the Schönberger Foundation and later the Turning Point Ski Foundation with PSIA national demonstration team member, freestyle skiing champion and long-time friend Ellen Post Foster. The Turning Point Ski Foundation, a non-profit 501(c)(3) organization, was formed to produce scientific analysis of skiing technique, develop alpine educational concepts and publish related material for skiing. Together Foster and

Schoenberger have authored and published five books and one video on ski education which are all currently in use by coaches and ski teachers. First was the Alpine Skills Achievement Manual for the U.S. Coaches Association, then the series of three books: Technical Skills for Alpine Skiing, Conditioning Skills for Alpine Skiing and Race Skills For Alpine Skiing. Next, they published the award-winning, best-selling book Skiing and the Art of Carving that ignited the carving revolution in ski education despite the conservative old guard claims that the shaped ski was a fad design and would soon disappear.

A year following their publication, the book and video were submitted to the International Ski Congress by the Professional Ski Instructors Association to represent their perspective on carving technique for modern ski design. 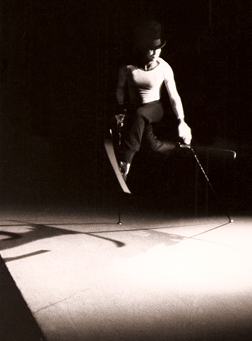 Schoenberger has performed in theaters on skis in 70 major cities. In 1984 he performed live on stage with Rochester Philharmonic Orchestra at the Eastman Theatre, the same year that Schoenberger was noted by Skiing Magazine as one of the most outrageous skier of the year. He choreographed and performed the 1994 Alpine World Cup opening ceremony in Vail, Colorado and in 1996, Schoenberger began performing open-ended runs in theatres throughout the West to critical acclaim. In 1999 he was invited to perform Schönberger Skis the Stage during the 2002 Winter Olympics in Park City, Utah. He moved his scene shop from his home in Vermont, to a rented warehouse in Salt Lake City, and began rehearsals for this special performance during the Olympics. While rehearsing, he continued coaching skiing in his studio space, and thus SkiStudio was formally born.

On October 23, 2001, the Utah Ski Archives honored Schoenberger with the “Pioneer of Freestyle Skiing” award for the role he played in helping to shape the region’s ski history.

After his two-month run during the Olympics concluded in 2002, Schoenberger moved SkiStudio to Park City. There, he made deeper commitment to a more physically accurate skiing experience by further developing his coaching methods and his alpine simulators.

On April 2, 2011, the U.S. Ski and Snowboard Hall of Fame honored Schoenberger with its "Pioneer of Freestyle Skiing" award.

On September 26, 2013, Schoenberger was inducted into the Intermountain Ski Hall of Fame. He is, after his mentor Alf Engen, the second person ever to be inducted in four of the five categories: Ski Pioneer, Ski Sport Innovator, Competitive Skier, and Inspirational Skier.

Schoenberger is currently writing and producing his next alpine stage production Nightfall of Diamonds. It will involve his next generation of ski simulation technology, and will be his largest theatrical production to date.

By appointment only
For questions or to schedule a session: